Our ship simulator, can assist in the investigation of a maritime accident through simulating events with the vessel's recorded electronic data. By providing in-depth marine accident analysis, were helping authorities to understand the complexities of a shipping accident, come to a successful resolution and define mitigating measures.

Successful resolution of incidents usually depends on having a full understanding of the circumstances. BMT REMBRANDT helps in this regard by providing in-depth vessel accident analyses to support legal cases and define mitigating measures.

Using Electronic Data for Visual Reconstruction and Analysis of Collisions, Allisions and Groundings

The main categories of electronic data are available from:

3D visual reconstruction platforms, such as BMT REMBRANDT have emerged offering broad reconstruction and simulation functionality. BMT REMBRANDT has been developed in conjunction with commercial ship operators, pilots and statutory accident investigation bodies. This type of hybrid tool provides essential functionality to merge a visual reconstruction and playback facility with a seamless switch over into full simulation “what-if” scenario testing mode. Applications might include, for example, exploring the impact of alternative rudder and engine orders or the impact of different weather conditions.

BMT REMBRANDT automatically loads in ship data (NMEA), AIS data for traffic vessels, audio data (bridge mics and VHF) and screen captures of the ECDIS and radar. All the above can be simply imported and synchronised by selecting a single folder containing the standard format VDR data. Furthermore, BMT REMBRANDT supports the playback of VDR data from multiple vessels simultaneously.

As an alternative to ship data imported directly from the VDR NMEA data, BMT REMBRANDT can import pre-processed spreadsheet data in csv (comma separated value). If the VDR has not recorded AIS data or where VDR data is unavailable for one or more vessels involved in a visual reconstruction, it is possible to import AIS data, externally sourced or purchased online. Time stamped AIS data is automatically synched within BMT REMBRANDT allowing the seamless visual reconstruction involving multiple vessels, with each vessel recreated from VDR and/or AIS data. On occasions, it may be necessary to provide a time offset when latencies occur between VDR and AIS data sets.

In BMT REMBRANDT, the reconstruction is highly configurable with options including:

BMT REMBRANDT replays the data showing outlines of the vessels’ positions on an ENC (electronic navigational chart). Playback can be run in real-time or fast-time. Kalman filtering adopted in BMT REMBRANDT serves to improve the fidelity of reconstructions and simulations.

A 3D image is generated using a combination of the VDR data and bathymetry and land profiles that have been automatically extracted from the ENC. This is supplemented with buoy, beacon and light information, also from the ENC. The sun and moon positions for the location and time are calculated to provide representative lighting conditions. However, these can be replaced with set daylight, twilight and night options, if required. Lights on traffic vessels are shown according to the ship status information provided by the AIS data. The user can move the viewpoint during playback and even switch to other vessels. Two examples of the visual reconstruction of actual collisions are described below. Panamax bulk carrier and a crude oil tanker collision: This provides an example where VDR, bridge audio etc. data from the bulk carrier has been obtained and converted. Four screen capturers are shown in Figure 6 from a BMT REMBRANDT thirty-minute video reconstruction of the incident.

The bulk carrier was transiting (full ahead manoeuvring) the NE bound lane of the Singapore Straits. No VDR data was made available for the crude oil tanker, so time-stamped AIS has been read in to display the tanker, which was crossing the SE lane to join the NE bound lane.

For ease of display, bridge audio can be inserted into text boxes within the display as shown. Both vessels suffered extensive damage in the incident after their anchors dragged in adverse conditions. The general cargo vessel had anchored some 0.8nm away from the tanker when it had been forced to move within the anchorage area after being blown into a nearby shipping lane in the force 8 and near spring tide conditions. This meant both ships were unable to maintain their position. The tanker was sitting high in the water with no cargo onboard, and it was blown towards the general cargo vessel before the crew had gained enough control of the vessel.

Taking Over Control of the Visual Reconstruction Playback

In some instances, following a visual reconstruction and playback, the next step will be to test alternative scenarios to explore other scenarios or the impact of onboard decisions made. In BMT REMBRANDT, at any point during playback, a calibrated hydrodynamic model can be selected and overlaid on top of a VDR tracked model. The prevailing meteorological conditions can also be activated to interact with the hydrodynamic model at the same time. A VDR tracked model playback together with fully interactive simulation model can then run in parallel, until the speed and rate of turn of the full simulation model matches the VDR tracked model. This process involves manually adjusting RPM and rudder using the onscreen engine and RPM controls. Once this is done, the user can activate full control takeover. This provides a powerful “what-if” added dimension to a basic 3D visual reconstruction.

The ability to rapidly convert, integrate, analyse and interpret VDR, AIS and ECDIS data to visually recreate a collision, contact and grounding event can help to answer a key question – What happened?

More recent developments to seamlessly switch a 3D visual reconstruction into a full take-control manoeuvring simulation that accounts for both hydrodynamic vessel responses and meteorological conditions at the time of the casualty can help answer two further questions – Why did it happen? and What can we learn?

Further refinements in this area are expected. For example, there is growing interest in wider “digital twin” concepts in shipping to support complex simulations of vessels and their systems. Undoubtedly, all of these will open new opportunities for improved and augmented navigation training. It will also help to support a “lessons-learned” culture in shipping and marine accident investigation.

Using a marine navigation simulator to investigate complex piloting and manoeuvring procedures in a simulated environment can enhance maritime operations, improve marine pilot decision-making and reduce risk. Maritime simulation studies can range from the development of new ports through to manoeuvring large vessels in restricted channels. 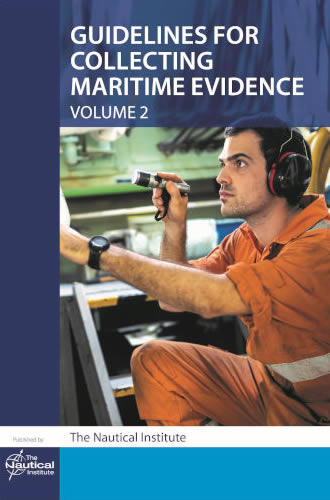 Dr Phil Thompson features in this Nautical Institute publication, looking at the topic of 'Using electronic data for visual reconstruction and analysis of collisions, allisions and groundings.