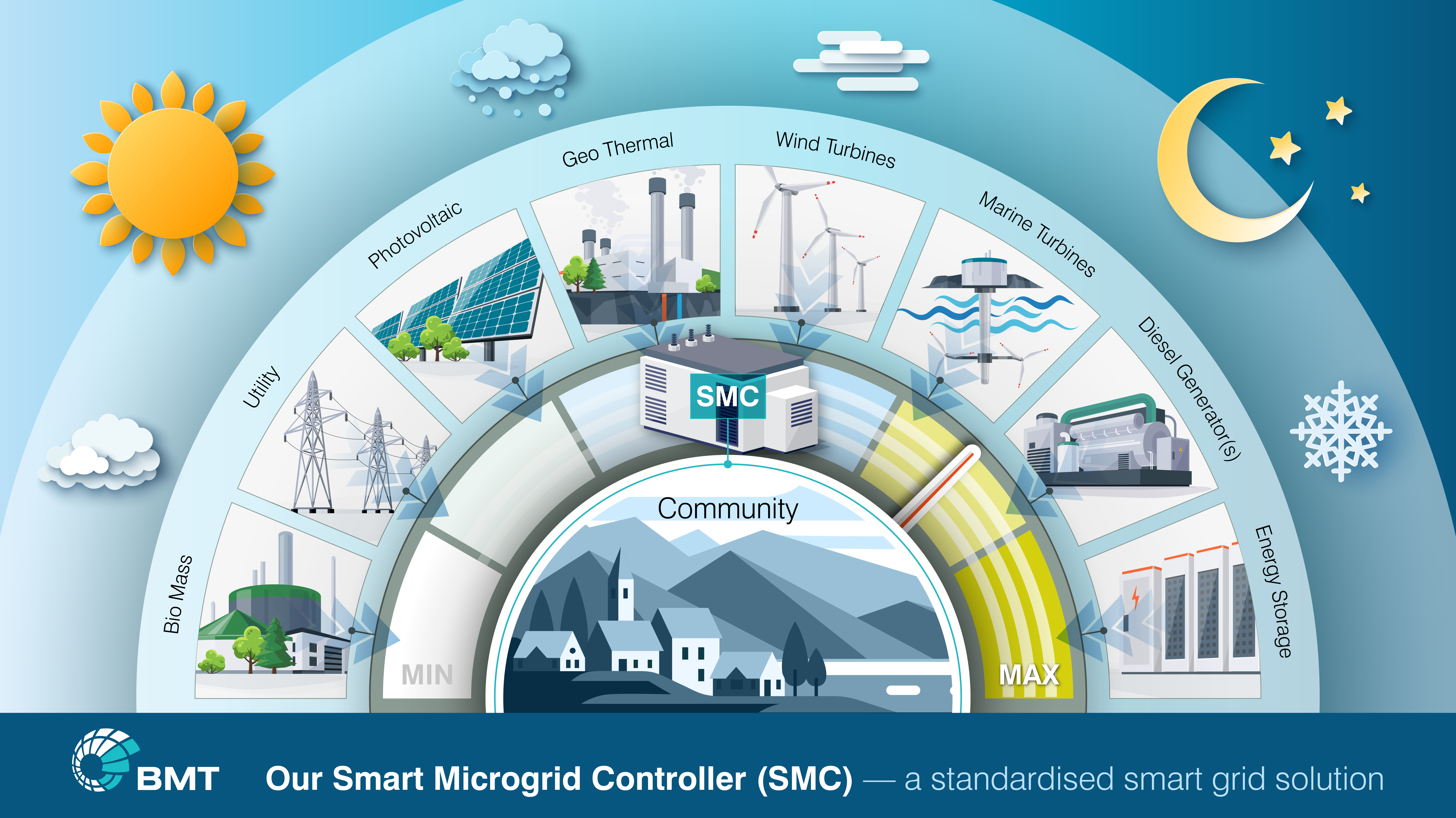 Off-grid and decentralised energy systems are now moving into the mainstream, becoming an option with real-world applications for reliable and renewable energy access, particularly for populations that do not have dependable access to centralised energy networks, for example rural, remote, and indigenous communities. Driven by technological improvements, falling costs, a proven track record, and recognition of their clean benefits, microgrids are now growing into commercial markets. The recent deployment in Canada of the microgrid controller is demonstrating BMT’s expertise in this emerging energy technology field, that could potentially launch the country’s off-grid communities into spearheading growth of the sector.

BMT’s ‘Ocean Energy Smart Grid Integration Project’ has developed a prototype for this transition to renewable and flexible local energy networks, according to Darcy Byrtus, President of BMT Canada Ltd. “With the energy sector in Canada at a critical inflection point as solar, biomass, ocean energy, and wind generation technologies become the lowest-cost ways to generate electricity”.

“As investment costs of a wide range of low carbon generation technologies are projected to continue to fall, the challenge is now one of system integration. With the rise of consumer consciousness of environmental impact, residents in off-grid communities around the world are becoming willing participants in the energy transition movement, but managing this increasing engagement poses its own set of challenges - incorporating technical, regulatory, social and economic elements”, added Byrtus.

“The energy transition is picking up speed and it's great to see a growing uptake of renewables. This can be challenging for island and coastal communities, and we think that new sources of renewable energy like tidal can offer a highly predictable and reliable power profile which could be utilised on Canada's east and west coasts. This is where our partnership with the BMT to test their Smart Microgrid technology comes in. We are working together to ensure our world-leading tidal energy technology can provide greater energy independence and security of supply for these communities." “It does everything you need to operate a microgrid,” added Moody. “It can operate seamlessly between the different in-feeds – storage, local generation, and the grid connection – according to the parameters specified by us, in our capacity as the operator, to suit off-the-grid, local and indigenous needs. It can monitor the state of battery charge, it can perform peak shaving to level out peaks in electricity use, provide blackout warnings and much more”.

“The full-scale demonstration of an optimised microgrid using tidal and solar energy represents a monumental opportunity, in today’s world where emerging electrification requirements are growing rapidly and can be seen to be putting greater strain and demands on communities' grids – not only in terms of technology, but also in mindset. As Off-The-Grid power operators in Canada and around the world move further down the road of energy transition, and as regulations demand more reductions in carbon emissions, that change ultimately becomes a physical and mental necessity”, concluded Byrtus.

“Canadian ocean innovators have a critical role to play in the future of energy and contributing to a net zero world. We also believe it will be one of the most significant drivers in our ambition for the ocean economy to grow by five times by 2035. In 2021, we announced the ‘Ocean Energy Smart Grid Integration Project’ and are excited to see the milestones coming from it to help get rural communities off diesel and transitioning to renewable energy.  Building on their partnership and collaboration, to see BMT and SME build on their work to now also empower vulnerable consumers to join renewable energy communities is a demonstration of the power of collaboration and what we can achieve when we work together.” said Kendra MacDonald, CEO, Canada’s Ocean Supercluster.

Offering BMT’s technology as a flexible ‘plug and play’ microgrid solution to market that integrates a bundle of predefined control blocks residing in off-the-shelf products can be the ideal path and solution to speeding up microgrid deployment rates in remote, coastal, and off-grid distribution networks.

To this end, the BMT solution is equipped with a state-of-the art microgrid setup that is managed by a flexible control platform. This allows developing and testing the different components of a microgrid control system from the device level (primary voltage and current control) up to integrated energy management systems (distributed units dispatch) to achieve the high-efficiency plug-and-play distributed power functionality.

“The Microgrid Controller from BMT operates as several ‘layered’ microgrid setups, corresponding to the reality of microgrids today.  As one of our most recent innovations its design is underpinned by a shared belief that at BMT, we’ve always been driven by a commitment to innovate – to help our customers leverage technology in truly unique and creative ways, whether to set new standards, pave the way for new thinking, or to improve outcomes for society as a whole. And over our many decades of ship design, propulsion and energy efficient technologies’ heritage, we’ve continued to evolve our passion for unlocking innovation with our customers and partners”, said BMT’s Martin Moody.

“With that in mind, Canada’s island and remote coastal communities are the optimal ‘blue economy’ location to test a series of power interventions on a large scale with valuable lessons being transferred to off-grid power networks and markets across Canada and potentially globally, with BMT having already leveraged and benefitted from its first collaborative and sovereign innovation experience on the ‘Ocean Supercluster’ initiative”, added Moody.

Targeted plug-and-play, platform flexible-designed microgrid controllers, such as the BMT solution, have a significant impact on facilitating the microgrids’ adoption. This impact could extend to both offshore and onshore utility operators in terms of maintaining system stability during energy exchange with microgrids at their points of common coupling.

The impact of unstable energy to a remote or off-grid community can be catastrophic when critical infrastructure are interrupted for even a short amount of time. BMT has recognised this energy challenge, and created a scalable innovative solution, developed for off-grid communities around the world. The solution utilises commercial off-the-shelf components, along with a series of control parameters which effectively manage the energy optimisation of the microgrid. The control parameters operate as a grid controller that efficiently balances the output from each energy source to support the required loads and users of the grid.

In addition, instead of utilising a separate custom and costly configuration for each community, a ‘standardised set of configurations’ may be employed for many offshore/onshore communities to quickly bring the microgrid online, and at lower costs. This approach, combined with core operational algorithms to maintain grid stability as the generators and loads fluctuate, is destined to be a winning solution in this space.

Global, Emerging and Local Indigenous Markets May Offer the Most Potential for BMT Smart Microgrid Controller

The international market appetite and potential adoption of the BMT Smart Microgrid Controller technology could be significant for future customers in both Commercial and Non-commercial/Military settings. The global Microgrid market exceeded $6 billion USD in 2020 and is anticipated to grow over 27% CAGR between 2021 and 2027 to $33 Billion USD.

The International Energy Agency (IEA) has projected that, given today’s technology state, to reach the UN’s 2030 target, about 40% of the total solution will need to be provided through some type of microgrid intervention.

Despite the challenges microgrids face, they are largely supported by Government departments representing Energy and Climate Change, NGOs and other reputable organisations as a solution to a widespread problem that if solved could vastly improve the lives of over a billion people.

BMT’s Darcy Byrtus said, “Delivering an off-grid transition to sustainable energy in Canada is, and always has been, at the front of our minds, and we have very clear goals for our energy transition future. With this technical functionality (‘Smart Microgrid Controller’) developed by BMT we have the potential to provide critical power to all of the country’s remote, coastal and rural communities, thus paving the way for them toward more resilient economic futures.”

“This microgrid collaboration is a significant milestone for energy control technology and renewable energy, with broad applications and cost benefits for the world at large, including for Commercial and Non-commercial/Military mobile power operators”, concluded Byrtus.

The project will commercialize the integration of ocean energy solutions to help reduce the dependence on diesel power generation in rural communities and increase the opportunity to use renewable energy sources.