A device for drones operating in the front line

We have developed an autonomous ‘air-ground payload transfer device’ to replace winches with truly disruptive capabilities for drone delivery applications.

Last month, at the UK MoD’s ‘Army Warfighting Experiment’ in Portsmouth, we demonstrated a globally novel payload delivery device that offers advantages for logistics drones in the most challenging environments.

We have developed a novel concept described as an autonomous ‘air-ground payload transfer device’ to replace winches with truly disruptive capabilities for drone delivery applications. The device is called SPARROW and is a new type of lightweight suspended robot that descends on a line with the payload leaving the drone at height. While the drone remains in the approximate overhead, SPARROW has autonomous control of its descent while making horizontal adjustments for a safe, quiet delivery.

This allows the drone to remain much higher above the destination, unheard and unobtrusive at ground level, compared to when using a traditional winch.

At BMT, we have an outstanding heritage and commitment to research and innovation that help to shape the ideas of tomorrow. This fully autonomous robotic concept is a great example of how we actively apply innovation to solve our customers’ complex problems. We are looking forward to seeing how this novel solution can help operators in a diverse range of applications and settings.

During 30 years of working in aerospace, I have not seen anything like the surge in new aircraft, systems, and applications that has happened in the last five years. SPARROW is a perfect example of this revolution, fuelled by a happy convergence of 21st century technologies harnessed together by computers and software that engineers like me could only dream about 30 years ago. 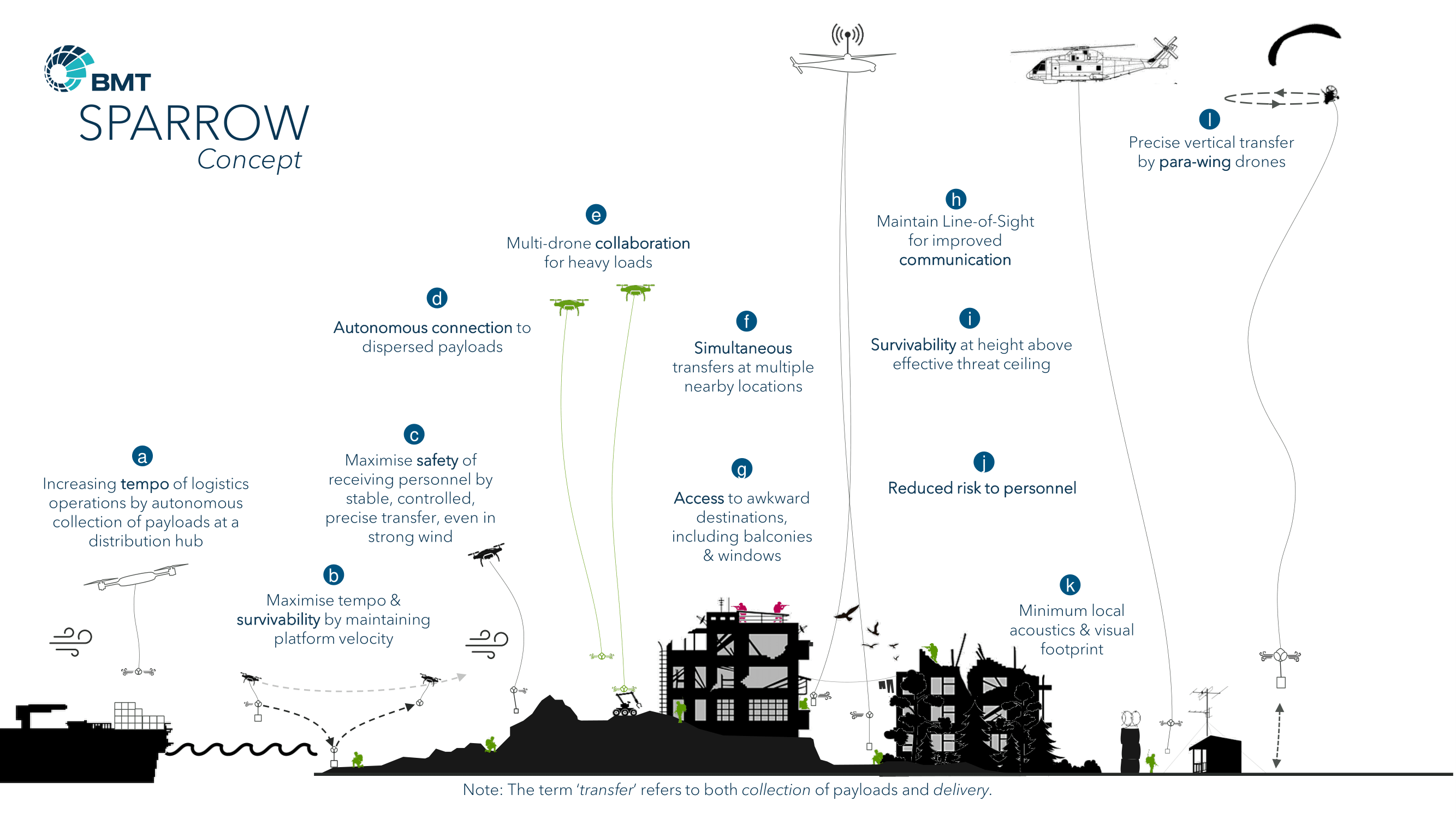 The SPARROW concept was initially developed by our team (including ex-service personnel) for defence applications where drones are being trialled to resupply troops at dispersed, unpredictable, and potentially hostile locations. Still early in its development, SPARROW was selected by the UK Ministry of Defence (MoD) for the annual flagship innovation event called the ‘Army Warfighting Experiment’. The demonstration took place in Portsmouth, UK, in November 2022 with an ‘Exploitation Symposium’ planned for February 2023.

We set about solving a fundamental problem for drone delivery caused by having to satisfy many conflicting requirements. For example, a useful payload capacity demands a large powerful drone, but smaller lighter drones are less vulnerable and better at accessing confined destinations.

Large rotors that can generate sufficient thrust to hover during payload delivery are naturally noisy, but it is better to be quiet in tactical or sensitive environments. In addition, it is safer for large drones to remain well clear of environments cluttered by buildings, trees and wires, but delivery may be needed in confined unpredictable urban spaces. A compromised drone and compromised performance is inevitable.

The ideal solution would offer the uncompromised payload capacity, range and speed of a large, powerful drone without the associated physical size, noise and risk in close proximity to people at the destination.

Replacing a traditional drone-mounted winch, our novel robotic device (patent pending) lowers both itself and the payload at the bottom end of a low-profile, weight-bearing line (exactly where precise control is needed), with just the top end of the line attached to a 3rd party drone above.

To provide autonomy, SPARROW has an internally powered cable drum, four small side-facing rotors, and all the necessary sensors, power, and processing. The drum rotation is controlled by an in-hub motor and brake, allowing a rapid and silent descent and ascent. The rotors do not generate lift and only operate when required to push sideways to counter the wind or move the payload horizontally.

The SPARROW concept enables the large, noisy, vulnerable drone to remain high above the complex ground environment at the destination. Just how high depends on the use case and wind strength; but safe controlled delivery is possible using this approach from 200ft in windy conditions, and 500-1000ft in light winds.

In comparison to using a traditional winch from a low hover, a SPARROW delivery offers a much smaller, quieter physical presence at the point of delivery. It also allows a safer, more precise delivery to a wider variety of locations, including confined spaces close to vertical surfaces and urban infrastructure.

What next for our solution

Alongside drone applications in defence, the approach may also offer value to manned helicopter operations and across other domains such as maritime ship-shore deliveries, support to maintenance engineers on tall structures, emergency services, and commercial drone delivery to domestic addresses. The project is looking to partner and licence the technology to a range of leading established suppliers.

If trials continue to prove successful, we are offering an alternative vision of the future in which the environment is not filled by the buzzing of drones hovering in close proximity to people, but one where drones remain safely at height, out of sight, out of earshot and out of mind.

Ask us about BMT SPARROW

Replacing a traditional drone-mounted winch, our novel robotic device (patent pending) lowers both itself and the payload at the bottom end of a low-profile, weight-bearing line (exactly where precise control is needed), with just the top end of the line attached to a 3rd party drone above. Watch a demonstration of the drone in a challenging environment.