BMT’s Gordon MacDonald presented with an Order of Australia Medal

On Monday, 13 June 2022, BMT’s Gordon MacDonald was presented with an Order of Australia Medal (OAM). An honour that recognises Australians for outstanding achievement and service.

This year, Gordon was recognised with an OAM for his services to naval architecture.

“It feels wonderful to be recognised for a type of work that you’ve done all your life, it came very much as a surprise.”

Though the recognition may have been a surprise, his entry into the maritime world seemed destined. Born into a shipbuilding family, he served in the merchant navy as a young man, working on oil tankers before taking a degree in naval architecture at Strathclyde University.

Having now been in the maritime industry for over 45 years. Gordon has held senior positions in the Australian Department of Defence, including in the role of the Director of Navy Platform Systems in the Navy Systems Command.

Gordon was recruited to Australia in support of the Collins-class submarine program and Anzac frigate programs in 1990.

“When these projects were just getting off the ground, we effectively oversaw them for the government, making sure the designer and the builder were doing what they were contracted to do,” he said.

“The complexity of warships is far more demanding than commercial ships and that is why I find it so much more challenging,” he continued.

“It is all the aspects of warfare, the communications systems, weapons systems, helicopters on board interfacing with satellite systems, it is just far more complex.”

“While the younger Naval Architects have tremendous tech skills, they do not unfortunately get the exposure to the throughput of projects we used to get 40-years ago,” he said.

Australia’s strategic outlook has become more complex in recent years and Mr MacDonald says we will need to “contribute” to meet the challenge.

“We have to strengthen our relations with our allies and must be seen to be contributing, we’ve got to up the ante.” he concluded. 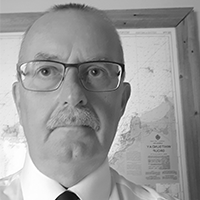 With thanks to Duncan Evans, The Daily Mercury article published Monday 13 June 2022.

BMT is pleased to announce that Lisa Hammock, Environmental Protection and Sustainability Managing Consultant, has been awarded the David Goodrich Prize by the Royal Institution of Naval Architects (RINA). The prize, awarded annually and named after David Goodrich, a former president of RINA and one of the founders of BMT, is given for the best paper presented at the annual RINA Warships conference.