Designing a vessel for a pioneering offshore wind project in Japan required us to work to new rules.

Credit: The original article written by Rob Clark (Chartered Naval Architect with expereince in a range of technical and project roles) was published in IMarEST's first 'Marine Professional' magazine of 2021.

The Akita Noshiro Offshore Windfarm Project, situated off the coast of Akita first in Northern Japan, is a first-in-kind commercial offshore wind project in the country and is expected to provide a combined output of approximately 140MW from two sites. The windfarms at Akita Port and Noshiro Port will be operated by the Akita Offshore Wind Corporation (AOW) and are scheduled to come online towards the end of 2022.

The wind farm service vessel (WFSV) designers at BMT were tasked with the challenge of developing a vessel for this new regulatory and operating environment, providing a platform to enable fast transit of technicians and spares to the turbines offshore. WFSVs are predominantly required to enable rapid personnel transfer, but also usually have the capability to undertake additional utility works such as the delivery of spares. Personnel transfer from the WFSV to the turbines on this project was planned to use the ‘bump and jump’ method, whereby the vessel uses its propulsive power to hold itself against the turbine access ladder (an operation called push-on), allowing technicians to step across.

As a general rule, a WFSV will be designed to strike a balance between operational efficiency, operability and reliability while also balancing out crew and payload requirements. In addition to operational considerations, the principle design challenge identified by James Lewis, BMT’s specialised ship design sector lead for offshore energy, was “to develop a vessel which would adhere to the Class NK rules along with Japanese flag regulations.” These were both new rule sets for BMT for this vessel type, and influenced all aspects of the vessel’s structure, systems and general arrangements, right down to details such as window calculations.

BMT’s design looked to address the initial efficiency question through the use of a catamaran design. This type of hull typically offers improved resistance and motions in heavier sea states.

The catamaran platform itself offers good stability in waves and excellent manoeuvrability for wind farm transfers. Waterjets were specified for propulsion. These offer better redundancy, with the additional benefit of providing enhanced manoeuvrability compared with other propulsion types. Each of the four engines and its associated waterjets are completely independent, allowing the master to shut down two or even three drive trains while the vessel is moving at slow speeds in the field.

Operability of a WFSV tends to be governed by the maximum wave environment in which the vessel is capable of safely holding station while pushing-on against the turbine. It is therefore heavily reliant on motion response while undertaking this operation.

reducing bow volume and moving the location of forward buoyancy pick up aft. This theoretically results in a bow with reduced pitch response which would therefore be pushed off the turbine by waves less readily. As is often the case, design optimisations targeted at a specific outcome do, however, result in compromises in other areas. In this instance, the reduced buoyancy at the bow reduces the load carrying capacity of the forward part of the hull. The criticality of the push-on operation led to the design of a wide range of fender systems, each providing different solutions for maintaining contact between the vessel and the turbine in the variable marine environment while also reducing risk of damage.

BMT specified its own Active Fender System® in this design, with the aim of reducing the risk of damage to turbines during push-on by reducing loads experienced on contact. This is enabled through increasing the distance over which the vessel decelerates.

Regarding reliability, the design focus here falls on the vessel systems, their spec and any built-in redundancy. Focusing on the main engines and propulsion system as an example, BMT chose to specify four completely independent drive lines to reduce the risk of maintenance downtime for the operator. If one drive line is down, the vessel can continue to operate off the remaining three drive lines. Maintenance simplicity has also been considered in the engine supplier decision. In Japan, Yanmar engines are a popular choice because operators can benefit from access to local maintenance services, further decreasing downtime over the vessel’s service life. Redundancy considerations have also been applied to the electrical system, with the vessel’s two generators each located in a different hull to provide physical, as well as system, separation.

The new design by BMT has drawn on its previous experience with mid-range crew transfer vessels and WFSVs to deliver a 27m-long catamaran powered by four engines and four waterjets, capable of transit speeds of up to 25kn. The vessel has capacity for a total of 15 persons on board (three crew and 12 technicians) and a cargo carrying capacity of up to 30 tonnes. The design is fully classed and being built to Class NK rules.

Two WFSVs have been built at Cheoy Lee Shipyards. The first ‘Red Star’ has been delivered, and the second ‘Red Star II’ is currently undergoing sea trials.

"Thanks to the Akita Noshiro Offshore Windfarm project’s firstin-kind status, the industry will be watching the vessels’ performance with interest". As Technical Project Manager, James is the main point of contact for all things offshore energy related and is based on the South Coast of the UK. Beyond spending lots of time on boats and having a BEng(Hons) in yacht production and surveying, James has over a decade’s experience in vessel design and construction from yachts to commercial workboats and ferries (aluminium, steel & GRP). Previous roles have seen James responsible for early conceptual design and contract work, procurement, class approval & vessel build, through to launch, commissioning and warranty. This valuable insight from both design and build perspectives along with extensive engagement with class and flag societies, provides James with an excellent commercial and legislative understanding of vessel design and build. 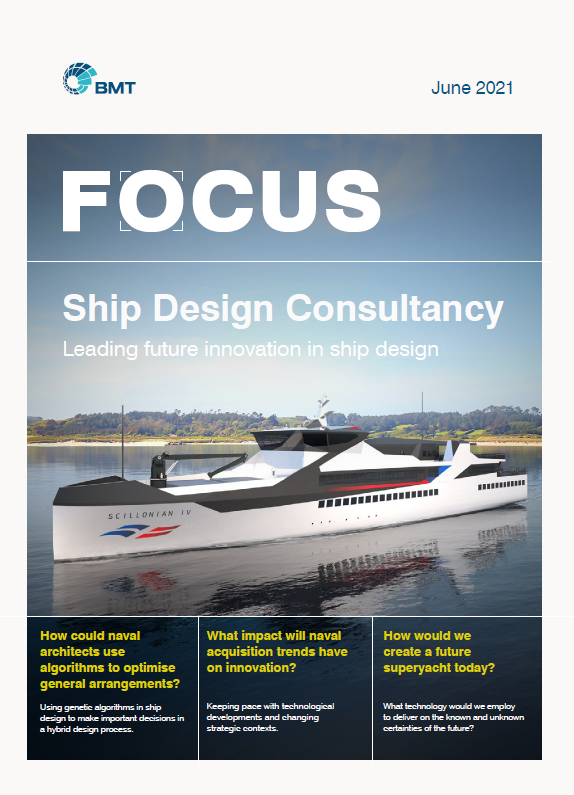 I have been with BMT for 30 years, having first joined in April 1991, working in a project management admin role in the Research Directorate in Teddington.