Confirmation bias: what is it? How does it affect you? Can you overcome it? Welcome to the second article in this series on some of the lesser known subconscious biases in the workplace.

Catch up on the first article on optimism bias.

This piece will look at a subconscious bias which has been a source of concern almost since the beginning of history: confirmation bias. Confirmation bias is the tendency to select and interpret evidence in ways that reinforce prior beliefs. For example, there is a widely known fallacy that all left-handed people are creative. Thus, with this information in mind you are more likely to identify instances where left-handed people are creative, thus confirming that pre-existing bias. This is simply not true.

This phenomenon is not new; confirmation bias has been commented upon by philosophers and great thinkers throughout history. Thucydides, the acclaimed father of scientific history (Norris, 1929), has written one of oldest known observations of the phenomenon in his 5th century BC work, The History of the Peloponnesian War.

“…for it is a habit of mankind to entrust to careless hope what they long for, and to use sovereign reason to thrust aside what they do not fancy.” (Thucydides, The History of the Peloponnesian War, 4.108.4)

This was not an isolated comment from an inspired mind in the distant past; confirmation bias has been observed throughout history. Dante mocked it in his Divine Comedy, and Sir Francis Bacon pondered upon it in his philosophical work the Novum Organum. Furthermore, it is not an issue confined solely to Western culture and has been remarked upon in the Islamic world too.  With these observations in mind, it is clear that confirmation bias is an integral human foible, with no culture, era, or individual entirely free from its influence. 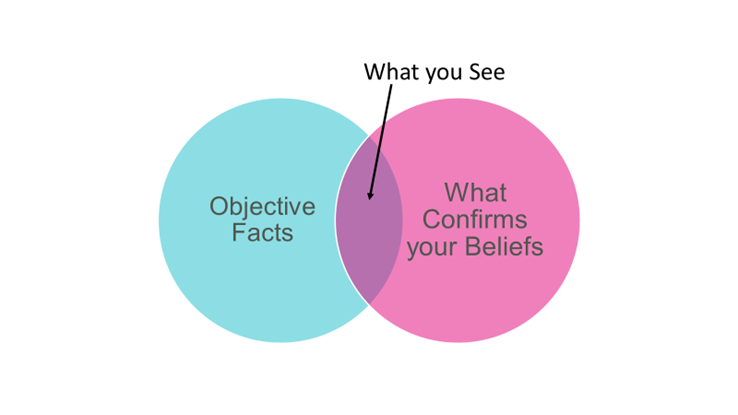 A 1996 study by Klaczynski and Gordon looked at participants’ religious beliefs.  The results suggested that participants were more likely to question the validity of the data that conflicted with their beliefs, but less likely to do so with data that supported their views. These findings suggest that confirmation bias can trigger a form of motivated scepticism of opposing evidence when processing data in a reasoned manner. This work has been supported by a multitude of studies when dealing with deeply held personal convictions, such as Taber and Lodge, 2012, who looked at gun control in the US. This phenomenon is perhaps a growing concern with the echo chamber possibilities inferred from social media.  This will be expanded upon later in the article. (Del Vicario et al, 2017).

It is important to note that confirmation bias is most extreme when dealing with areas of deep personal motivation, such as the aforementioned religious beliefs or political beliefs. People are far more rational and discerning with data when viewing content for issues that are not personal, such as preparing for project work with significant weighting on red teaming or engaging in apolitical business ventures.

Confirmation bias: how does it affect our decision making?

“A mind is a terrible thing to change ... you believe stocks are going to outperform other assets, and all you can hear are warnings of the bloodbath to come in the bond and commodity markets. In short, your own mind acts like a compulsive yes-man who echoes whatever you want to believe”. – (Jason Zweig, Wall Street Journal, November 19, 2009)

Given the inherent influence that confirmation bias has over our prioritisation of information and its corresponding validity, it will come as no surprise that it has a noticeable impact on our decision making. We are naturally inclined to trust information that agrees with our pre-existing viewpoint and to downplay — and even mistrust — information that counters this. Therefore, we are inherently likely to make choices that will naturally favour and support pre-held beliefs and viewpoints.

In the age of social media this has had more far-reaching impacts, and confirmation bias has played a leading role in producing what have become known as ‘echo chambers’. This is where social media algorithms give priority to content that conforms to the user’s previously engaged content (and hence content they would enjoy again), resulting in users predominantly engaging with like-minded persons. Not only does this result in a circle of information, reinforcing an individuals’ pre held beliefs, but it also means that they are far less likely to access information that conflicts with these pre-existing viewpoints.

It is further exacerbated as people are increasingly more likely to disregard any countering information, or attack the source of that information to discredit it, regardless of objective merit, in a more aggressive manner. This all serves to underpin existing biases and undermine our desire to learn new things. (Del Vicario et al, 2017). Therefore, confirmation bias directly impacts the content you choose to engage with and share within this domain. Due to the near unlimited availability of online content it is very difficult to convince people when they do not want to believe.  (Cooley, 2019)

“The proliferation of search engines, news aggregators and feed-rank algorithms is more likely to perpetuate ignorance than knowledge” (Chamorro-Premuzic, 2014)

Confirmation bias can even influence our decision making when it comes to finances. This is particularly applicable when looking at financial markets, especially when considering that traders would typically hold a positive view regarding an asset’s future cash flow. If later information proves positive, then all traders have interpreted it correctly. However, if this information is negative, confirmation bias tends to lead traders to ignore the negative data, despite potential long-term consequences. This theory for supporting negative information could help explain several financial phenomena, such as excess volatility, excess volume, and momentum. (Benos, 1998).

Perhaps the most damning indictment of confirmation bias is its reinforcement of the concept of the ‘in group’ and the ‘out group’, a phenomenon that can be reinforced through the echo chamber of social media.  Any information that confirms the out group as different or lesser when compared to the in group perpetuates the cycle of confirmation bias, ultimately leading to individuals subconsciously dissociating themselves with any data that could possibly implicate the out group in a positive light, and more consciously choosing pre-dominantly to associate with those perceived as the in group. (McCabe,2015)

Confirmation bias: are there any positives?

With its significant impact on how we process and validate information, confirmation bias is perhaps one of the less positive of the subconscious biases. However, that is not to say it is completely virtue free. As with all subconscious biases it has evolved for a reason, and it is likely that this is to help us process large amounts of data in a quick and efficient manner in an attempt to lead to a positive outcome with minimal cognitive effort.

Although there is a notable risk of confirmation bias leading us to overlook and disregard conflicting data, it can have a positive effect on incentivising us to look in greater detail at information that supports our beliefs, seeking to find the minutiae that supports our arguments. This, in turn, enables the presentation of a better, more evidence-supported case for the positives of arguments. If this is combined with analysis that gives credence to countering viewpoints, it can lead to more detailed cases for an argument.  (Naji, 2017)

Furthermore, confirmation bias can be a useful tool in areas such as marketing and sales. If a salesperson can understand their target audience then they can play off their confirmation bias, leading to a greater chance of successful business interaction. (Aagaard, 2017)

Ultimately, perhaps the greatest positive of confirmation bias is simply its pervasive nature; it affects all peoples and all cultures, with confirmed biases only becoming more entrenched as an individual ages. With this in mind, if you are able to understand your own confirmation bias (and corresponding doubts) as well as a target audiences biases, then you can position your argument in a manner that appeals to them, resulting in a greater chance of a successful interaction.

Confirmation bias: how you can overcome it?

As with most subconscious biases the greatest tool in your arsenal to overcoming confirmation bias is simply being aware of its existence and prevalence.

A key method of overcoming confirmation bias in your intended audience is to account for how they view the matter at hand. This can be done through a process called intellectual empathy; essentially this means seeing the world through another’s viewpoint. This can be very challenging at first as we inherently focus on our version of the point. However, in terms of overcoming this it is vital to focus on the audience’s account instead. Once you can account for their version it becomes far easier to tailor your arguments and facts accordingly, as well as emphasising your common identity with your audience, all of which makes you appear more agreeable and therefore more likely to succeed in getting your viewpoint across, albeit tailored in a slightly different light. (McCabe,2015) Not only will this help forward your argument, but it will help you to be more empathetic, promote a fairer outcome, and hopefully lead to a more equal and balanced playing field. This process can be significantly aided by consulting in a team environment where there is a diversity of thought.

When dealing with especially entrenched beliefs or matters of a controversial nature it may be useful to engage in a process which social psychologists call Minority Influence. This technique centres around prompting the majority to at least consider another viewpoint, even if they will not reject their version of a matter. The foremost manner in which to achieve this is to promote a neutral ground where both parties can begin to appreciate the other’s viewpoint. With issues of deep personal conviction this can take a very long time. However, in a commercial setting where both parties are working towards a mutually agreeable end goal, it is hopefully far quicker.

In order to help minimise the threat of your own confirmation bias, the following five steps may help:

Confirmation bias is perhaps one of the less positive examples of a subconscious bias, leading to individuals seeking information that confirms and validates pre-existing beliefs, to the detriment of information that challenges this. However, it is important to note that confirmation bias is at its most influential when dealing with issues of extreme personal significance, such as political and religious matters. Humans are far better at making rational and objective decisions regarding content with little personal investment, such as safer business ventures and projects.

When dealing with charged environments where confirmation bias is likely to play a more significant role it is vital to consider how your audience feels and views the matter at hand. Empathy and humility go a long way to bridging divides. With these considerations in mind, you may find yourself a more persuasive individual and better able to gain support for your ideas as more people empathise with you.

Alex is a former Royal Navy officer who still serves actively in the Information Operations branch of the Royal Navy Reserve. His consulting experience has seen a focus on strategic change and transformation. He has a keen interest in the psychology behind our everyday and workplace decisions.

Read the article on Optimism Bias

With the threat of international terrorism still looming large, port security remains of paramount importance to Europe, not only due to the direct threats to life and property, but potential economic damage can arise.

6 Key Lessons in Risk Management from the Coronavirus outbreak

The Coronavirus outbreak will shape risk management in a way that few other events have. Whilst its full impact is still unknown, there are already lessons to be learned for project practitioners.

More and more high-profile organisations, are already seeing neurodiversity as a talent strategy and recognise the strengths neurodiverse people can bring to the workplace.

The Value of Training in Virtual Reality